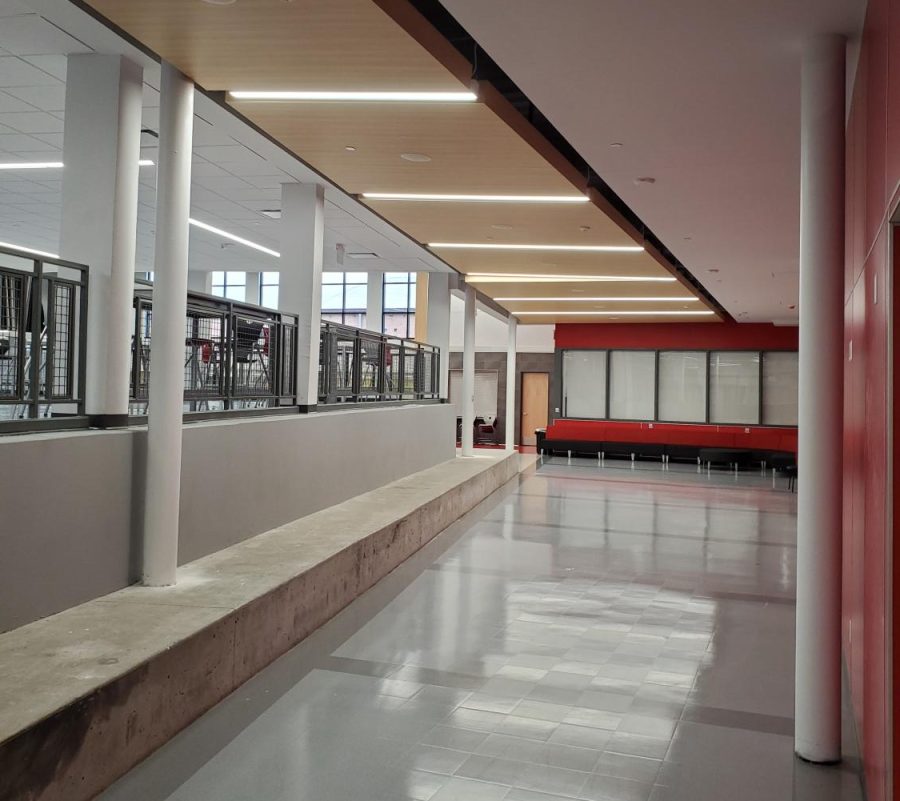 As students walk through school during the 2021-22 school year, they will have access to many new spaces.  In 2017 the community approved a levy to update the buildings in the district and as a result RAHS has new spaces for CTE (Career Tech Education), art, music and science.

Here’s an overview of some of the new spaces. 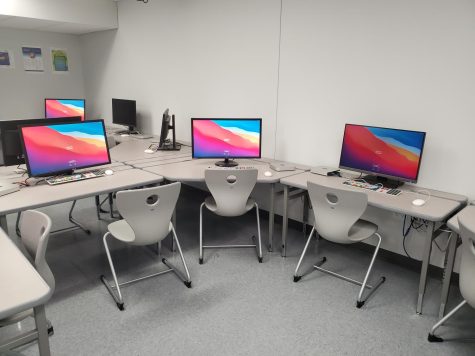 Classes have gained both new structures and new equipment. Students in Ms. Owens’ photography and graphic design courses will find that D109 has more space. The updated desks create little ‘pods.’ Students will be using new Apple PCs, on 4K ASUS and Acer monitors. The new photography studio allows for the use of green screens, the capturing of low-light photography, and more. The studio will be available to all photography students, especially Photo 3 and 4 (the independent study classes). It’s also available to members of the photography club, a student-lead club during Raider Time every Tuesday.

Across from the band rooms in D115, where the old art rooms were located, is one of the many new computer labs for the drafting and engineering classes, moved down from upper C wing. Much like D109, the PCs and monitors have also seen an upgrade. The computer labs have windows that look out over the prototyping lab, a large space with woodworking tools and welding stations, and a far cry from the previous makeshift wood shop in upper C.

The engineering courses need a woodshop to build what they have designed. Design is only the first half of these classes, with the second half being construction.

One such example is the final project for mechanical drafting students, where they have to design and then make a toy. Despite only being a teacher at RAHS for two years now, Mr. Relson, the teacher of small engines and the engineering classes, has plans to expand the small engines program to gain more welding stations and 3D printers.

Of course, RAHS also has new art rooms, which are in lower D and have windows out into the lower commons. They’re taking up the space left by the food classes, which were moved to the new E wing a couple years ago. 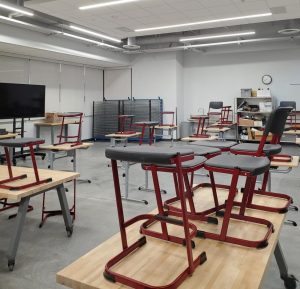 When asked about the benefits of a new classroom, the painting and drawing class teacher Mr. Tinsley said, “More possibilities with regards to what we can teach our students. It is brighter, there is more lighting, we can look out into the common area, and it just has a better feel too—the ambient feeling is really, really good, and kids seem to respond to it very well.” Right next to Mr. Tinsley is the pottery room, where Mr. Moeller teaches: pottery.

The workshops, such as woods and small engines, have also gotten new machines and tools. Mr. Davies said that the new equipment will allow students to get hands-on experience with tools that are currently being used in the field of industry and trades. Outside of the woodshop course itself, Mr. Davies explained how he hopes to generate a revenue stream with the new space as a way to assist with the costs of running the classes—which might lead to students not needing to pay the lab fee. Minnesota’s Starland Metals provided all the new furniture in the woodshop. Tables, countertops, and storage cabinets that are made of solid wood and stainless steel.

One of the largest spaces added onto the school is the new auto shop. While Roseville has been offering auto body classes at the high school for several years now, the shop itself has always been at the middle school, RAMS, in Little Canada. Transportation and scheduling issues that prevented students from joining the class have now been eliminated since students can walk through lower D wing to the shop.

One half of the shop features six hoists to service cars, the other having storage, work tables, and free space. There’s also a separate space attached to the shop that resembles a traditional classroom.

“I said, ‘Well here’s the blueprints, what do you guys think?’ and [The former student pointed out that] the hoists were a little too close to each other.”   Input like this has resulted in the space feeling like a real auto shop.

Teachers have expressed that they miss their old classrooms—kind of. “I do have fond memories of it,” said Mr. Tinsely about the old art room in D114.

Mr. Davies said that he missed the old-school feel and the smell of sawdust, but not the too-small space and the “headaches and hassle that went along with having a classroom that was 50 years old.”

Mr. Moeller further expressed that he misses the sentimentality, but also the fact that he had personalized his old classroom.

With growing class sizes and limited space, renovations and expansions were necessary. Enrollment in the 2018-19 had a student population of 2,315. Three years later, RAHS has gained so many students that they had to close enrollment.

Mr. Moeller says that RAHS has ‘a small city’ attending each day. And as more students take interest in the trade classes, 50-year old facilities just were not enough anymore.

“That was the dungeon and now we’re in the castle,” Mr. Sopcinski said.

Now, RAHS has the space it needs. The next step is to maintain it. “I’m going to really hope that students understand that this is not gonna happen again. We’re not gonna have a remodel in 5 years, so that if you destroy it, this is where you live,” Mr. Moeller said. “I’m really hoping that students embrace this new construction and don’t take it for granted—I know it’s hard when you only operate in Roseville, like you don’t go to another school and see what they have and realize: we have really nice facilities here. So, I hope students take ownership of that, and I really hope it starts with our upper-level students.”